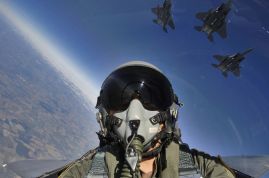 A fighter pilot in a dog fight is focusing on many things that appear to happen all at once, while still focusing on the end game – winning.  When an enemy aircraft comes into radar contact, he is gauging his and its speed, size, numbers and type of and manoeuvrability of the enemy aircraft, cloud cover, sun position, all unfolding through chatter over the radio with their wing-man, all in an effort to determine how he is going to out manoeuvre his opponent, take action and win.

This is the same for a business owner in their market.  They are getting customer feedback, ensuring cashflow, dealing with staff or client issues, finding new sales to meet growth targets, negotiating new supply agreements, expanding into new territories, launching new products or services, while all of the time trying to out manoeuvre their competition and win – and if you don’t have this mind-set, someone else does.

And just like the in the history of air combat, the market place is moving faster, technology is making huge advances, and social media & the internet are increasingly extending the reach and speed at which other players can engage your market.

In 1998, I stood on the deck of a US aircraft carrier during flight operations as fighters took off and landed from bombing targets in Iraq during Operation Desert Fox (as a result of weapon inspectors being removed from Iraq).   I also worked alongside pilots in the headquarters as we watched potential engagements with Iraqi aircraft via the aircraft tracking system radar, and sat in on mission debriefs with UK No 617 ‘Dam Buster’ Squadron.  We talked through the multitude of issues that the pilot must be contending with to make a rapid decision, especially in light of the no-fly-zones and rules of engagement complicating their decision making.

So how does a fighter pilot do this and win in an ever increasingly complex environment?   According to John Boyd, (the USA Fighter Weapons School Instructor who revolutionised aerial tactics and develop his concept of the OODA loop), decision-making occurs in a recurring cycle of Observe-Orient-Decide-Act (OODA).   An individual or business that can conduct this cycle quickly, observing and reacting to unfolding events more rapidly than their opponent can “get inside” the opponent’s decision cycle, gain the advantage and ultimately win.  And while this has been around a while – it is timeless.

The key to victory is to be able to create situations wherein one can make appropriate decisions more quickly than one’s competition. Time is the dominant parameter. The pilot who goes through the OODA cycle in the shortest time prevails because his opponent is caught responding to situations that have already changed.”

It is no surprise that these principles apply in business.  As John Spence states in Awesomely Simple, ‘Speed = success.  You must create a culture of urgency.  Clear direction + strong information flow + fast decision making = an agile organisation.’  Unfortunately many businesses are either ill-informed, don’t develop options, are slow to react, or cant decide, implement or follow-through – or all of the above.  Yet they often convince themselves that slow and deliberate is the way to go.   And while strategic decisions can often be made in strategic time frames – if you have no decision making framework you will always be reacting.  So lets look at the simple process for making this work.

Observe: the collection and observation of data by any means.  How are you collecting information on your market, the competition, or benchmarking? What environmental indicators are you looking for that might predict a market shift?   Taking time to observe and see what is happening around you the fastest is imperative – that’s why the F-16 has an oval-shaped canopy is so the pilot can see 360 degrees, and why the heads-up display was invented so a pilot didn’t have to look down at instruments for a split second. Just like in sport, the more readily you can continually take these things in the better prepared you will be.   It’s like in rugby when Dan Carter gets the ball how he has all the time in the world, it is because he can observe more quickly what is happening around him.   So start regularly observing your market, your competition, technology developments and looking for indicators that will better inform the decisions you should make.

Orientate: how do you then pull these views together, analyse and synthesise the data to form a current mental perspective that starts to shape what you should do. In sport it might be seeing where players are, that informs a first five that the planned move is off, but the chip kick is now on, or a skip pass has been read but has opened a gap to sell a dummy pass and pursue the gap.  How often do you bring in market and your own performance data, analyse what it is telling you to form a perspective.  Have you ever watched a sports game and seen a move that has been executed as if in practice only for it not to work because they hadn’t watched what the opposition? – the same can happen in business.

Decide: the decision to select a preferred course of action is then based on the current mental perspective from Orientate.   In a fighter jet travelling at high speed those instant decisions – right or wrong – that cost winning or losing, are being decided in milliseconds.  In business it is, ‘do I take the opportunity or not?’  The entrepreneur’s curse is that there are always more opportunities than you have capability or resource to pursue, so this is when you reference back to your strategy to check for fit i.e. is this my core business? Is this my target market?  Is this where I want to expand? Etc.  Every leader should also realise that you will never have all of the information, and if you do it may be too late.  There will be ambiguity and uncertainty, known as ‘the fog of war’, so we need to be confident in making decisions without all of the information – the key is to make a decision, and that decision can be ‘no’.  And as Warren Buffet said, ‘the most successful business people say no to almost everything’.

Act: the physical implementation of the decision.  Executing action as fast as you can to make the necessary change.  The difference between intention and attention is execution.  And as soon as you have taken action, you begin observing again, to see the reaction or counter action, ready re-orientate, decide and act.

The faster you can OODA, the greater the likelihood that you will beat your competition and lead your market, leaving them to react in your jet-wash.

Greg is a consultant at Advisory.Works